Glad I don't need too much sleep. I need every moment I can get to put the finishing touches on my new series for middle grade children.

It is called The Ruby Key, and currently there are three completed books in the series.

Elora is a daring, stubborn, teenaged girl, brave in the face of danger, terrified of dark spaces, recklessly rushing into danger to save those she loves. 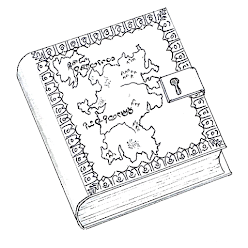 Elora’s world is turned upside down when she finds a beautiful but powerful diary which carries her into the world of Roub-Talum where a sinister foreigner has taken control of the throne that she discovers should be her own. With the help of her friend Bowman, and an army of warriors known as Black Shadows, she sets out on a quest to expel the foreigner from her land and retake her castle but is dangerously threatened by the foreigner’s army of Tocbioras, shape changing beings able to transform their human bodies into the shape of birds, or when threatened form into spine-chilling beings of dark mist, able to manipulate and destroy the minds of their victims. As danger closes in, Elora finds that her diary is more than a door into another world, but a remarkable tool in the hands of those of the royal blood.

Elora’s journey around her land of Roub-Talum is interrupted when flocks of Tocbioras, shape changing beings whose mist form is crippling and sometimes deadly, attack a banquet held in her honor. Sent by the foreigner, whose ultimate goal is to retake the castle at Roub-Talum and expel the people from the land, the Tocbiora’s steal Elora’s powerful diary and capture Liam, leader of the Black-Shadows and Prince of Roub-Talum. Elora’s narrow escape turns disastrous when her ship is wrecked on the edge of unexplored land, where the foreigner has built himself a fortress and begun his invasion. With the help of a cunning bandit named Adam, and a sweet young Tocbiora called Jewel, who refuses to bow to the foreigner’s wishes, Elora sets out to rescue Liam and retrieve her precious diary, a task which may prove impossible as the foreigner begins to discover the secrets of the diary and pursues her persistently.

After Elora’s narrow escape from the foreigner, whose intention is to seize her homeland of Roub-Talum and destroy her people, Elora is stranded in the strange land of Bioraliss, where she is held captive by the Tocbioras, shape changing beings that can form themselves into crippling dark mist or disguise themselves as dark birds. Whilst Prince Liam sets out on a quest to cross the perilous Canyon of Beyond with the intention of finding the true leaders of Bioraliss and returning them to their home, Elora escapes and returns to Roub-Talum. When her Knight Marshall cunningly leaves Elora’s service and joins the servants of the foreigner, Elora sets out with her army of Black Shadow warriors to find her Knight Marshall and defeat the foreigner, a mission which may prove unachievable as the foreigner fights back, bringing more and more of his Tocbioras to Roub-Talum to support his invasion.